As this is my 100th blog post I thought I’d share with you Henry’s birth story. Everyone has their own unique birth story and this is his. I wouldn’t say it’s the nicest birth story ever but definitely not the worst.

I hated being pregnant, I spent far too long worrying about the birth and not enough time focusing on the fact that I was actually going to have a baby to look after afterwards.

I had a very detailed birth plan and I knew that I wanted an epidural, no exceptions!
Henry was due on the 8th of Jan and everyone kept telling me that it was very rare for babies to come early so I wasn’t expecting him anytime soon.
Then on the 4th Jan I went into labour!
That night as the OH and I walked up the stairs to bed I peered out of the window and what did I see… SNOW and lots of it! I looked back at my partner and jokingly said “It’s snowing, guarantee you I go into labour tonight”. Little did I know that I actually would, 3 days before my due date.
We both went to bed, same as always, nothing happening. It took me ages to go to sleep as it did every night at that stage of pregnancy. (I just couldn’t get comfortable).
Then suddenly in the middle of the night I awoke with a start and sat upright in bed. I must had made a noise or something because the OH jumped up out of bed faster than I have ever seen him move. He then promptly announced that I was in labour. It still makes me laugh now that he knew this before I did.
With this being my first child I didn’t really believe I was in labour. I was in a kind of denial about the birth, like somehow I would just suddenly have a baby without actually giving birth.
I remember he kept asking me “Do you think your in labour?” and I remember thinking ‘how the hell do I know, I’ve never done this before!’ I’d been having alot of Braxton Hicks pain weeks before this and I wasn’t really sure if it was just that or labour.
It felt like period pain, a sort of warm feeling all around my ovaries with the cramping pain in my stomach. The pain came and went in waves exactly the same as I get every month with my period. It wasn’t anything like you see in the movies where the woman suddenly screams, then her waters break and five seconds later she has a baby. It was definitely a gradually pain.

From here on in everything was kind of a blur but I will tell you the bits I do remember, so if it seems a bit disjointed then that is why.

I remember the car journey, and I remember thinking at the time, ‘Thank god it’s snowing, now he can’t drive to fast. Silly things you think of, the fact that I was about to give birth was irrelevant.

I then remember arriving at the hospital and worrying about getting a ticket for the car.
Then it was the longest walk of my life from the car park to the maternity ward, (why do they put this ward the furthest away the possibly can!) and having to stop every minute for the flow of pain.

We finally got into the ward and they examined me straight away, I was only 3 centimetres! This was going to take a while.
By now the pain was like really strong period pain but nothing I hadn’t felt before, every month for the last 14 or so years.
I told them I wanted an epidural and they said I’d have to wait for the man with the drugs as he was busy with someone else at the moment. I don’t really remember much after that point until he arrived, I think I went into some kind of trance or something.
When he did finally arrive I remember being in quite a bit of pain by then, I had to lean over the side of the bed and stay really still, easier said than done when you are in that much pain. I felt like saying to him ‘How about I kick you full pelt in the goolies and then you stay still while I stab you in the back with a very big needle’. Luckily I was in to much pain to speak.
As it turned out I didn’t even feel the needle go in.
I must admit I did feel a sense of relief after the epidural went in that this pain was going to stop soon, or so I thought!
After about an hour or so after I had the epidural I was in more pain than I was before. The midwives couldn’t work it out until I tried to stand up. Basically I couldn’t, I couldn’t feel my legs at all, I couldn’t even wiggle my toes. So naturally I panicked, they’ve bloody paralyzed me!
What they decided happened was something to do with the chambers in my back along my spine, so the medicine had gone straight down to my legs instead of my stomach, where I needed it.
By now I was in quite a lot of pain and was temporarily paralyzed from the waist down and still hadn’t actually had any pain relief that was working. This was not going to plan.
They decided to get the medicine man back in and do ANOTHER epidural but higher up in my back this time.
Once this one was in it worked, I had no pain, it was amazing. The only problem now was that I was so numb down below that when it came to the time to push I couldn’t. This is where it gets a bit nasty, just to warn you. So out comes the ventouse (the thing they attach to the baby’s head and basically suck them out of you). They had to cut me down there in order to get it onto his head, luckily because I was so numb I didn’t feel this at all.
So after much pulling and tugging which was sending H’s heartbeat up, not surprising really (not the best way to come into the world) and about 16 hours later, he was finally born. 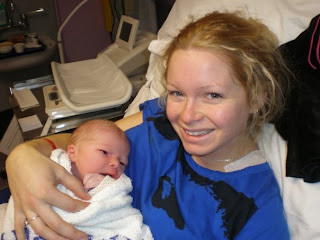 You think this story would end there but it doesn’t (by the way if you’ve made it this far well done).
After he was born and the midwives had sewn me up again they wanted to transfer me into the recovery ward, only problem was I was still paralyzed from the waist down. They had to maneuver me onto a bed with wheels and roll me into the room. I then had to have a catheter put in which was horrible, possibly the worst bit so far, not because it hurt, I still couldn’t feel anything but because I knew they had to take it out again at some point when the pain relief had worn off.
I spent the entire night awake in bed worrying that I was going to rip the catheter out if I feel asleep. I still couldn’t move and H kept being sick (nice tar looking black sick) and I couldn’t do anything to help him so I had to keep calling the nurse in every 5 minutes to sort him out. Apparently he swallowed a lot of the fluid inside and he was bringing it all up, which was terrifying. 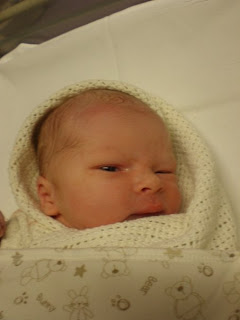 I didn’t get the feeling back into my legs until the next day and by then I was so tired from lack of sleep that I didn’t know what planet I was on let alone that I’d just had a baby.
When I finally got to go home I was very sore from the stitches and it seemed to take weeks to heal but I had the most beautiful little baby boy which made it all worth it. 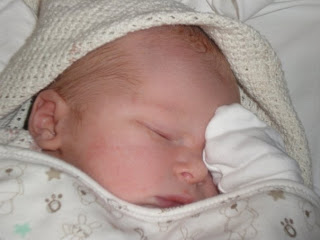 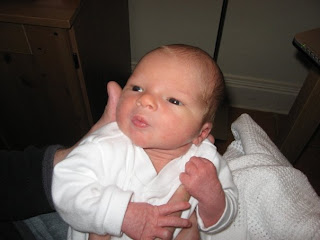 3 and a half years later and my little baby boy is so not so little any more. 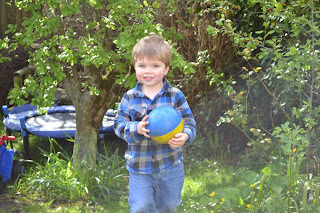