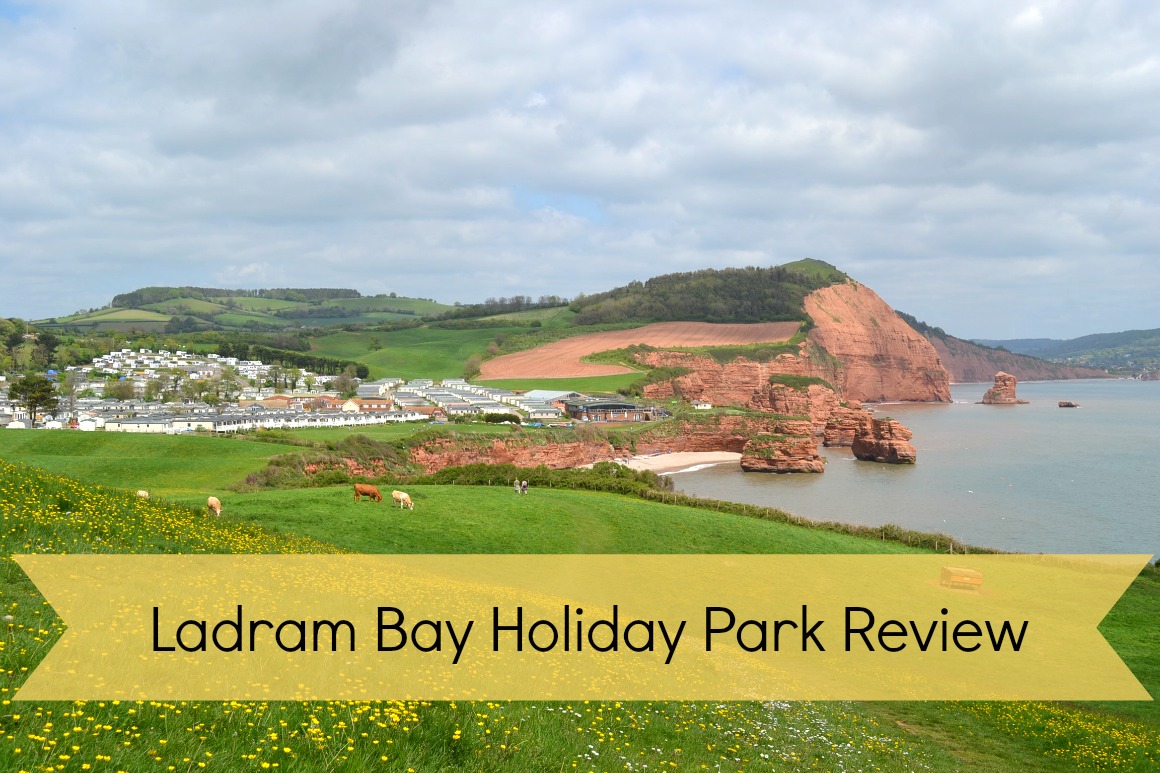 One of the great things about moving to a new area is that you have lots of new places to discover. It also means that you don’t have to travel far for your next holiday. This weekend we went on a mini-break and we were only 27 miles from home but quite frankly we could of been anywhere in the country.

We had sun, sea and spectacular views! What more could you want? 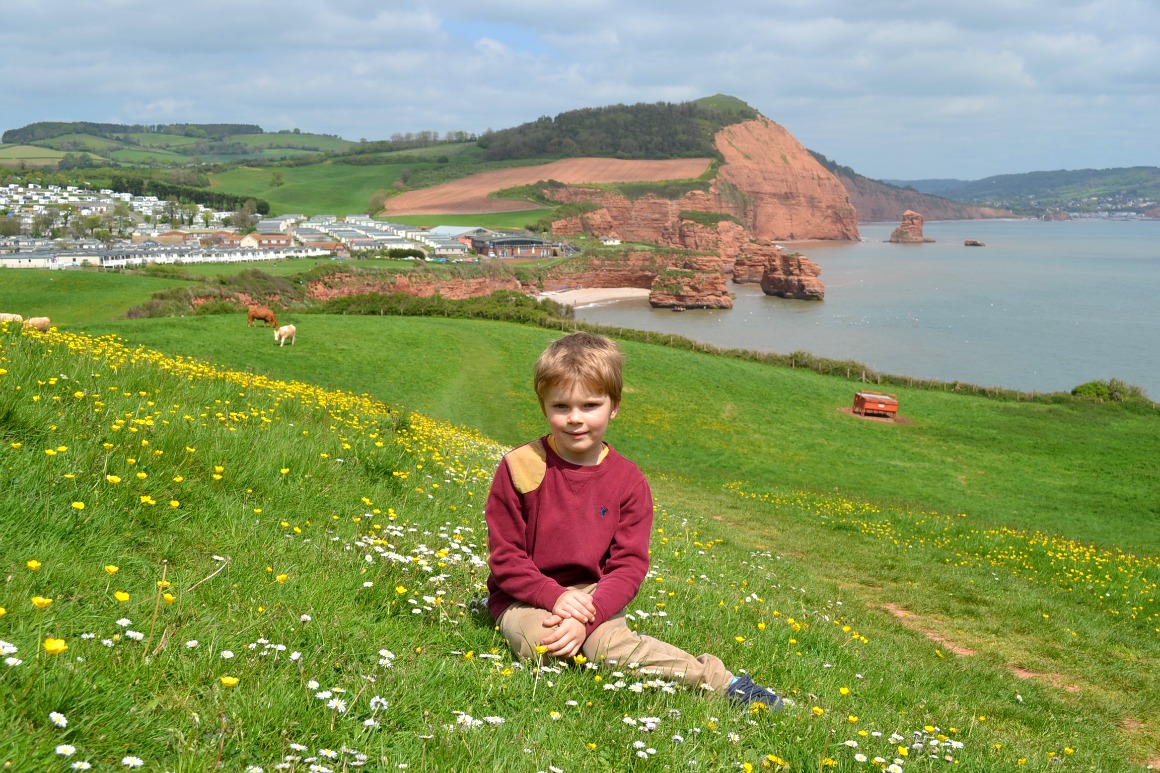 Ladram Bay is a secluded spot located on the East Devon coast between Budleigh Salterton and Sidmouth. It forms part of the South West Coast path on the Jurassic Coast. 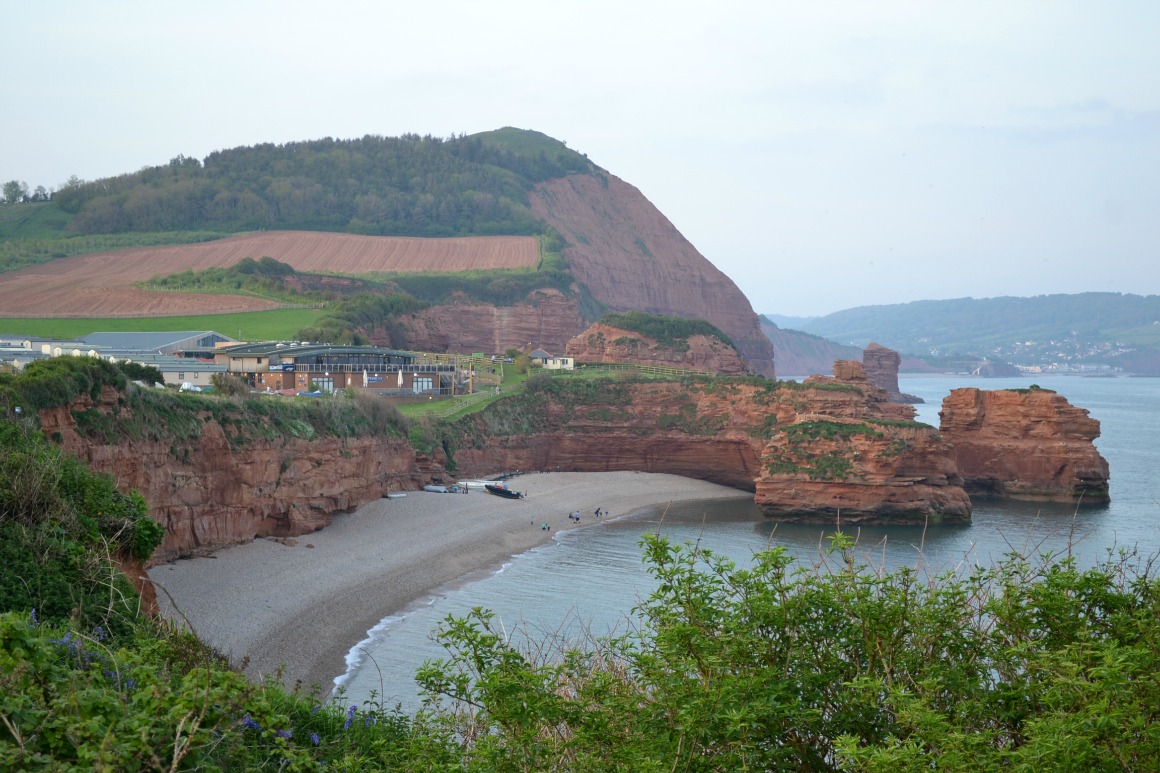 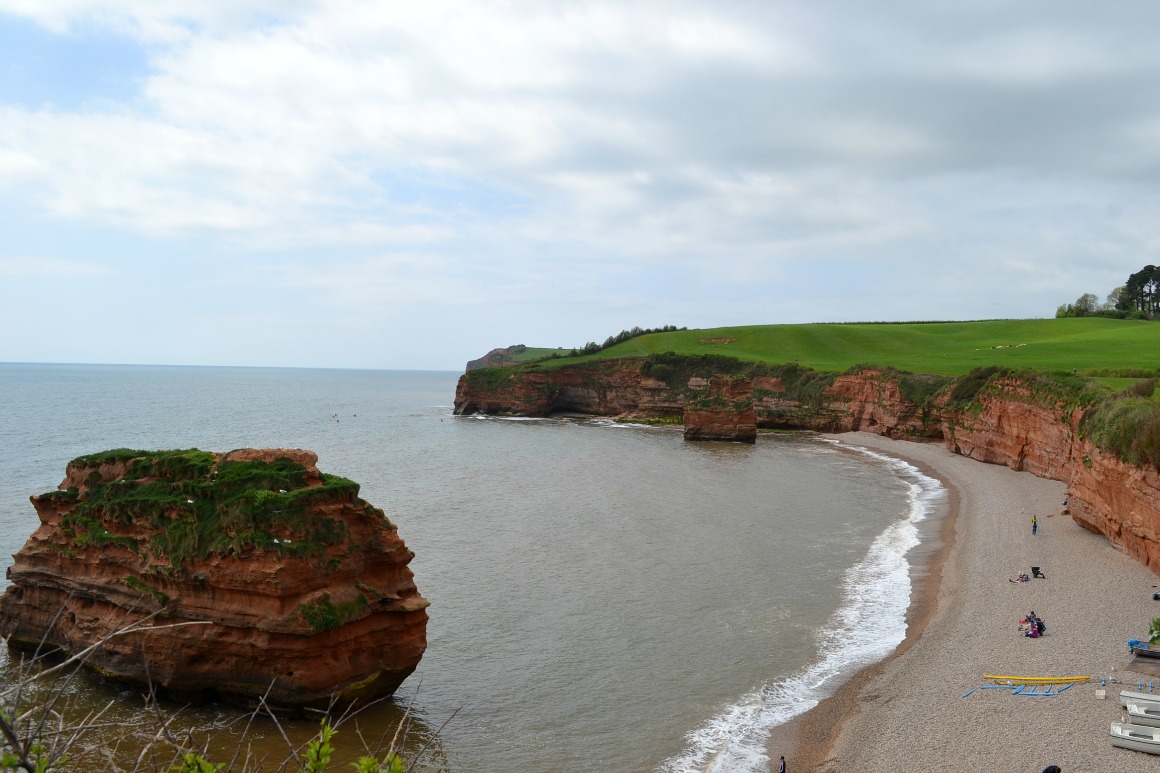 We spent the weekend here at Ladram Bay holiday park which is located right on top of the cliff. As you can see from the pictures above, it’s an award winning family holiday park complete with kids clubs, entertainment, play parks, soft play and water sports. It’s one of the largest privately owned holidays parks in Devon.

We stayed in one of their ‘Gold’ caravans which are located at the front of the park and have the most breathtaking views out to sea.

When we first walked through the door all you could say was ‘Wow look at that view’. We’ve never stayed anywhere with a view like that, well apart from on our boat but that’s different. 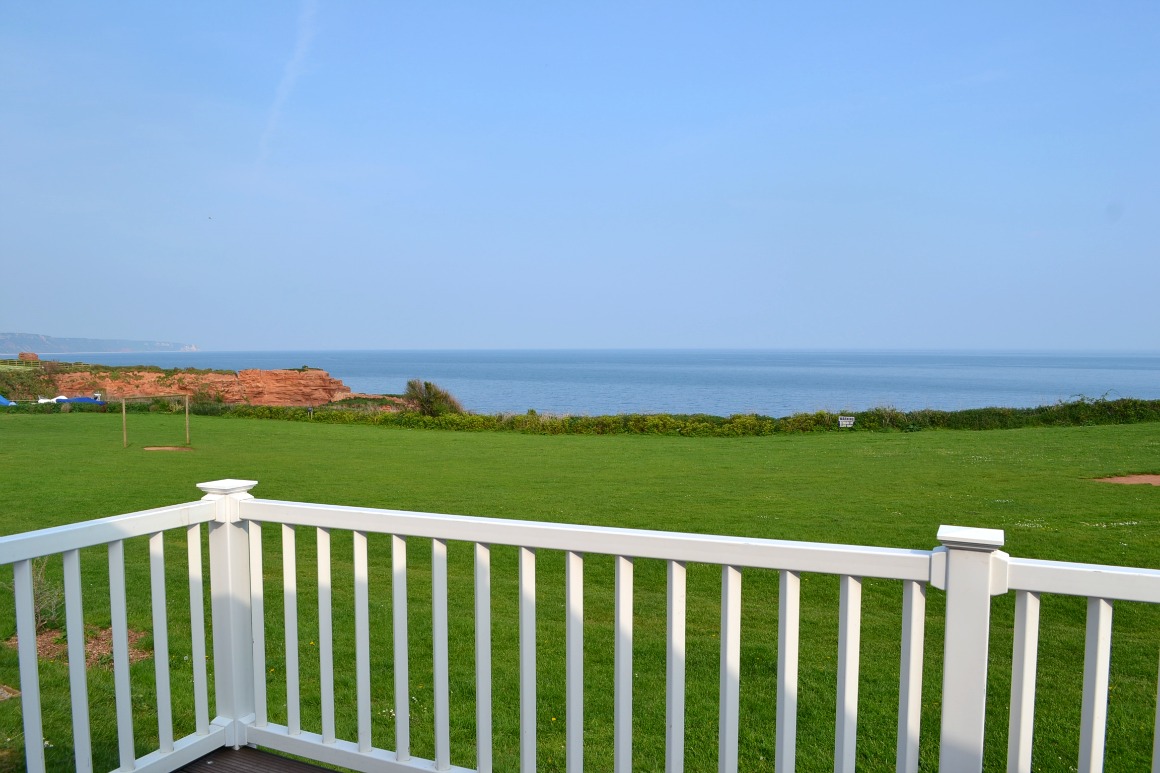 The caravan itself was very modern with nice soft furnishings. I did notice that the carpet had a few stains on it but we weren’t too bothered about that and it didn’t effect our experience. Just thought it was worth noting.

The kitchen was very well equipped and had lots of pots and pans for you to use. 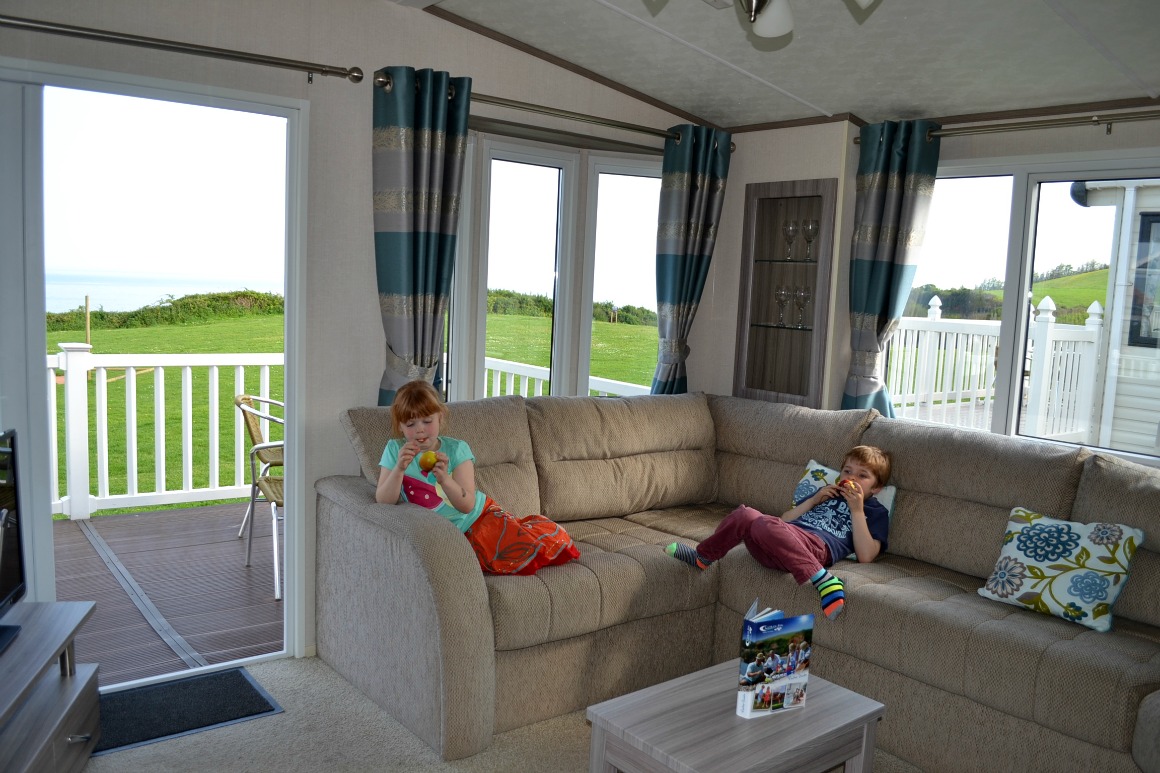 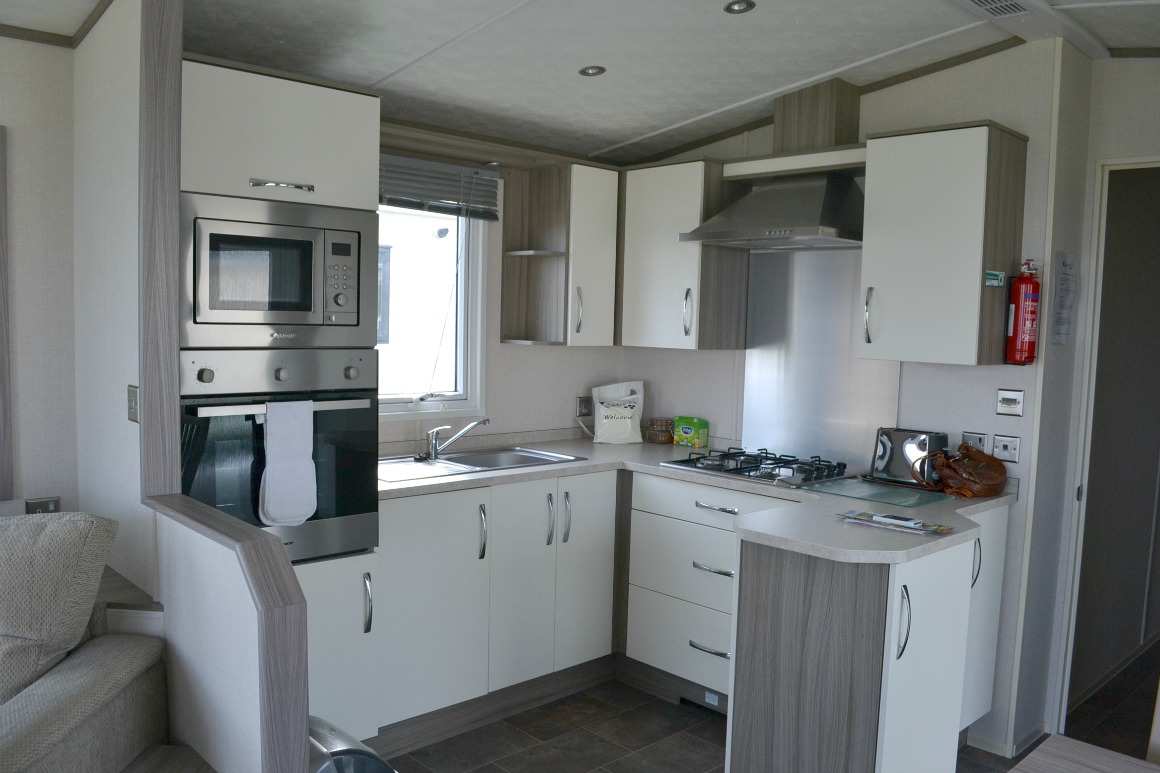 I freaked out a bit when I had both the kiddies on the toilet shouting at me that there wasn’t any loo roll which was a bit of a nightmare. This involved us having to quickly run to the shop on site to stock up. Only later on did we discover that there was a loo roll included in the welcome pack, but only one, so make sure you pack your own especially if you are spending a week there. I didn’t even think about packing loo roll. We are fairly new to caravan holidays but I’m guessing some places provide it some don’t?

Also included in the welcome pack was a bin liner, a dish cloth, a sachet of washing up liquid and a few cleaning cloths. 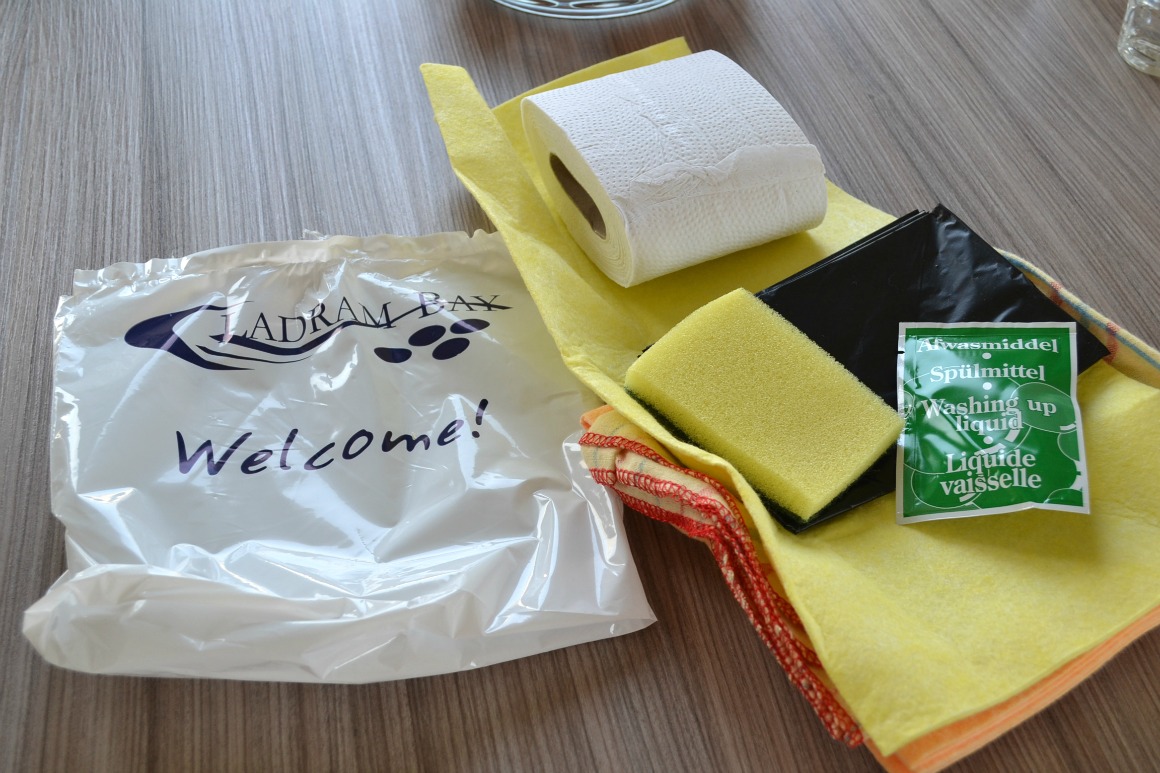 There was however a complimentary bottle of wine which went down very nicely whilst I was sat on the balcony admiring the view. 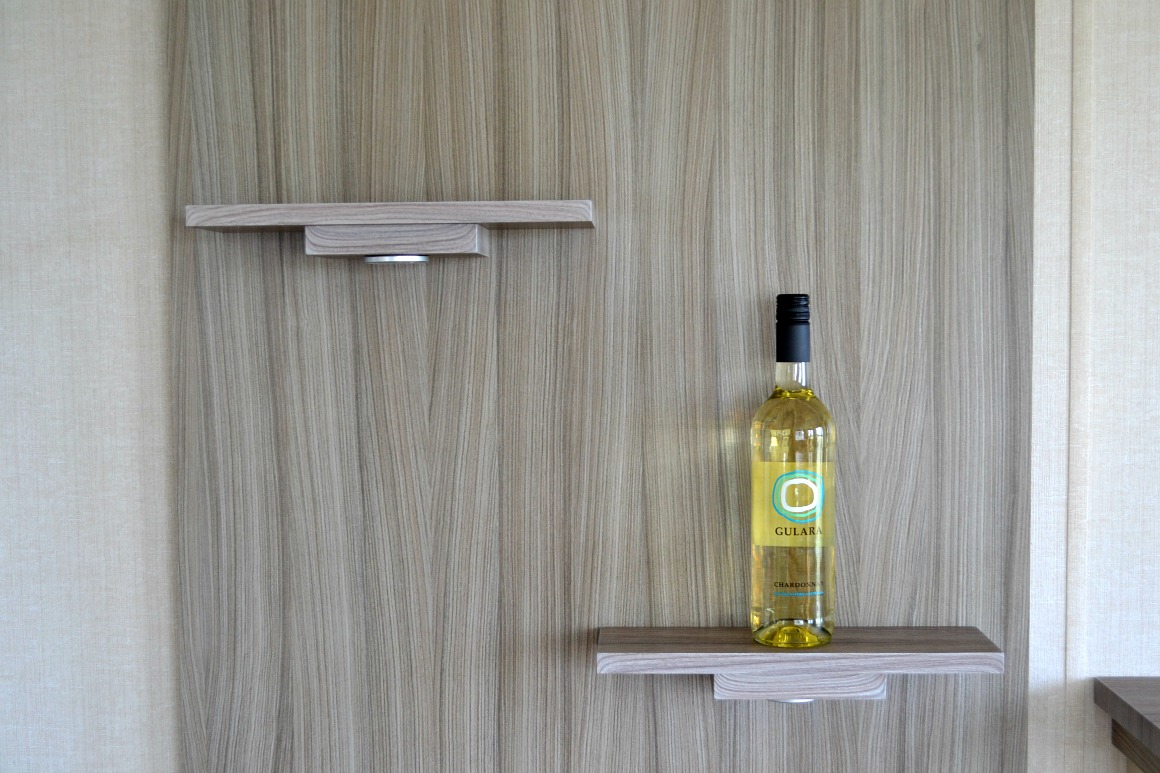 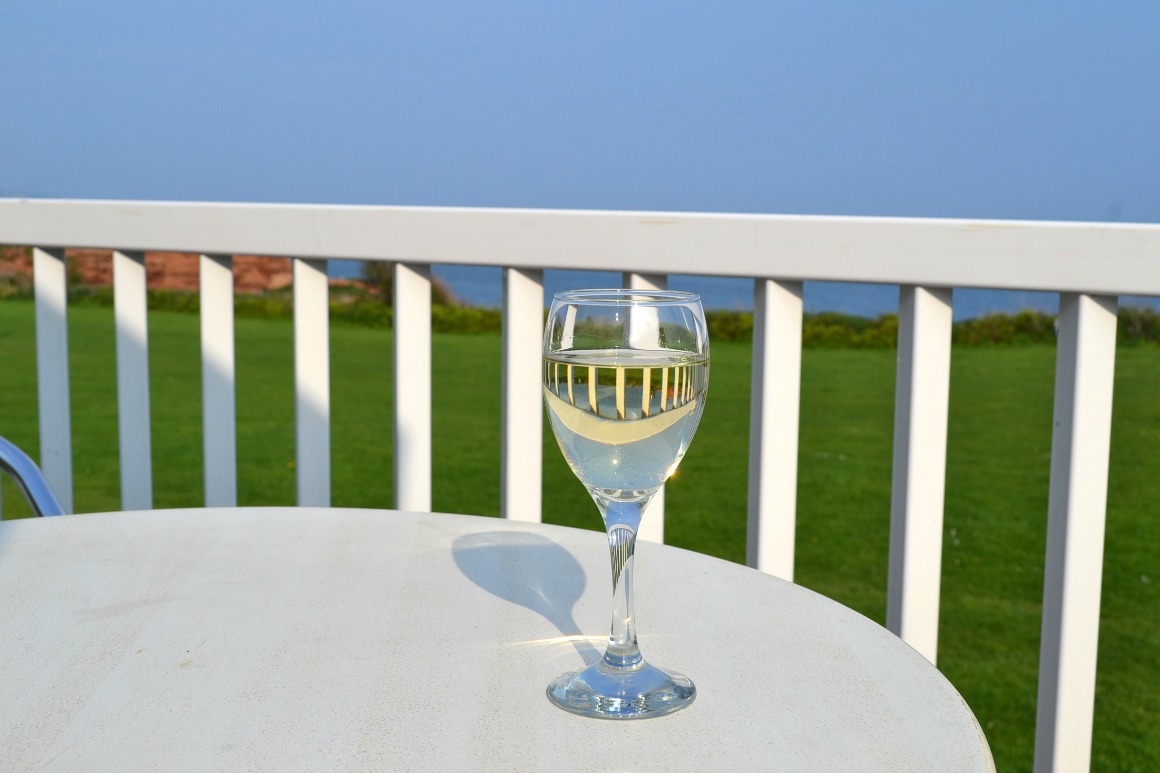 Our caravan had 3 bedrooms, one double and two twins and I believe that the sofa also made up into another double. 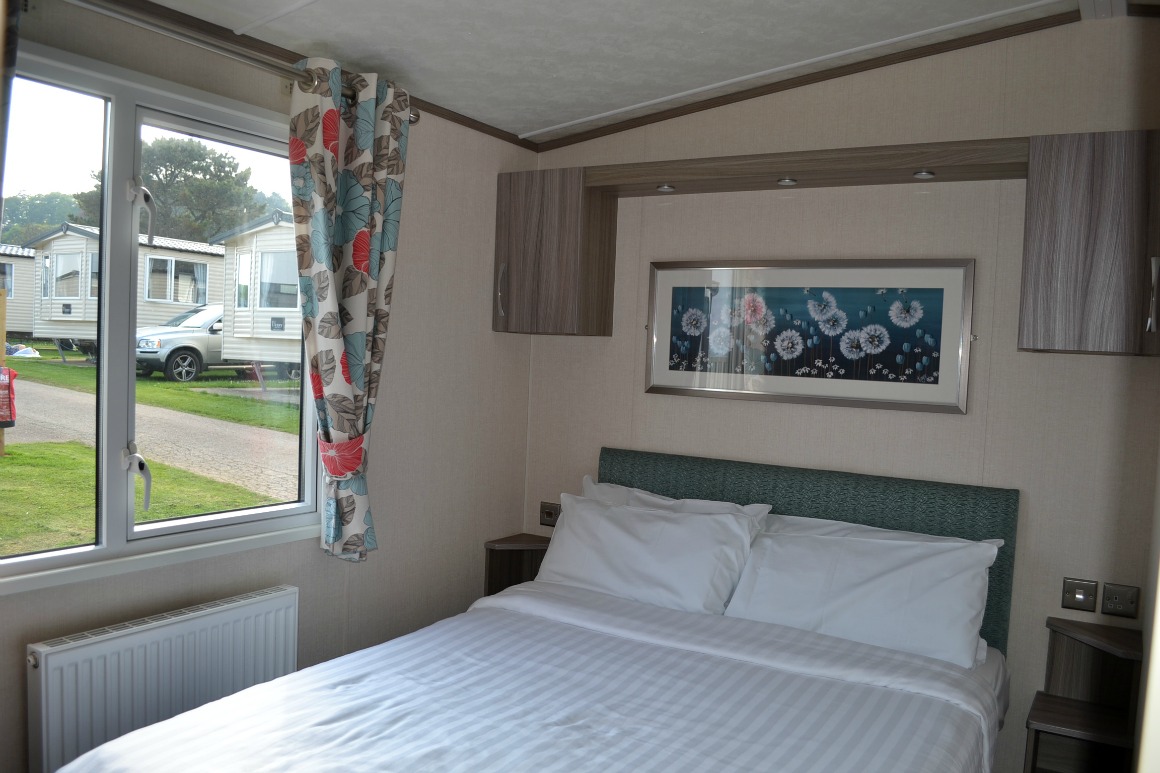 I must admit it was nice to have the beds premade, in a lot of holiday parks you have to make up your own beds which can be a bit of a pain, especially if you have travelled far to get there and have over excited children that just want to go and explore their new surroundings.

In front of the caravan was a big green area where the kiddies can play ball games. That was great because you could sit on your balcony and watch them playing without worrying about them. On the second day we bought a ball in the shop for £1.99 which kept them entertained for a good few hours. Phil had tried to get one when we first got there but got told off by the lady in the shop as he entered because they were due to close soon. As he then went to walk straight back out again she said ‘Oh it’s okay you can still get what you need’. After a long week of work Phil couldn’t be bothered with the fight so simply walked away muttering something along the lines of ‘you either want my money or you don’t!’ 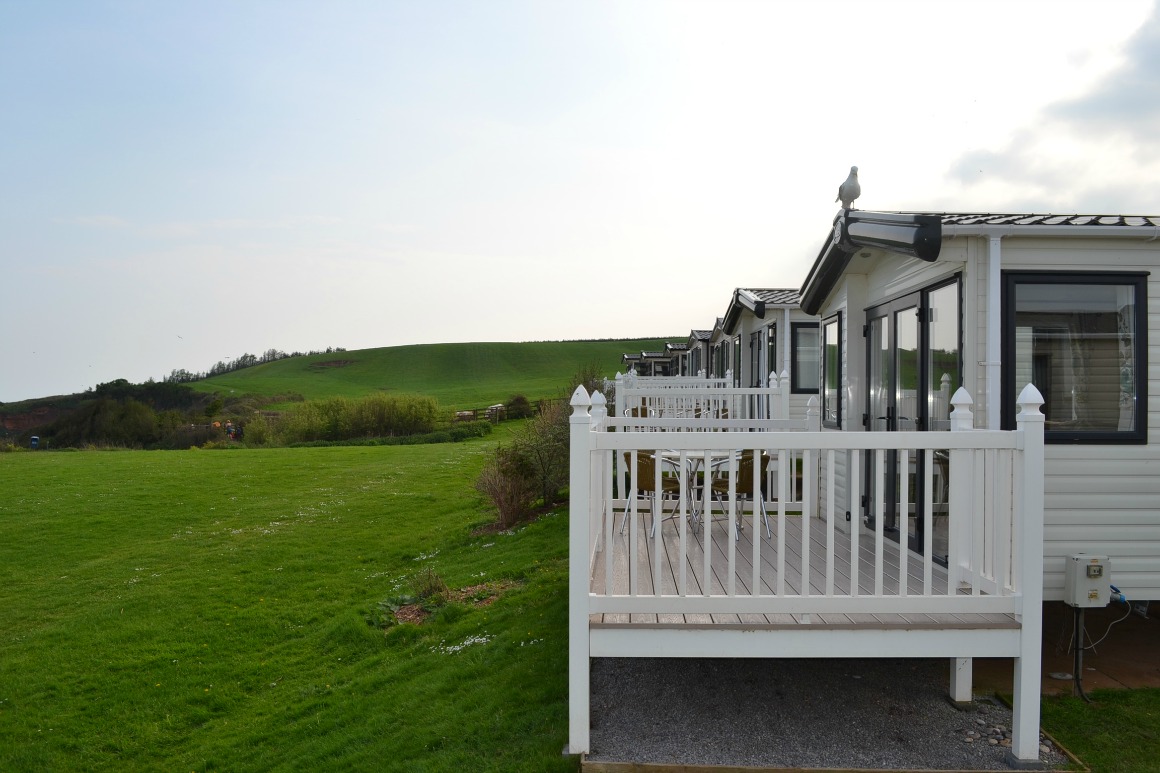 The park itself has many facilities including a swimming pool, entertainment venue, restaurant, pub, adventure golf, a shop, a fish & chips takeaway and a fantastic kiddies play area.

What I loved about the play area is that you could sit on the balcony that overlooks it and enjoy a nice  bottle of wine while still being able to keep an eye on the children. They could also move between the different areas without you losing sight of them as all the facilities are in the same area including the playpark, the soft play and the crazy golf. 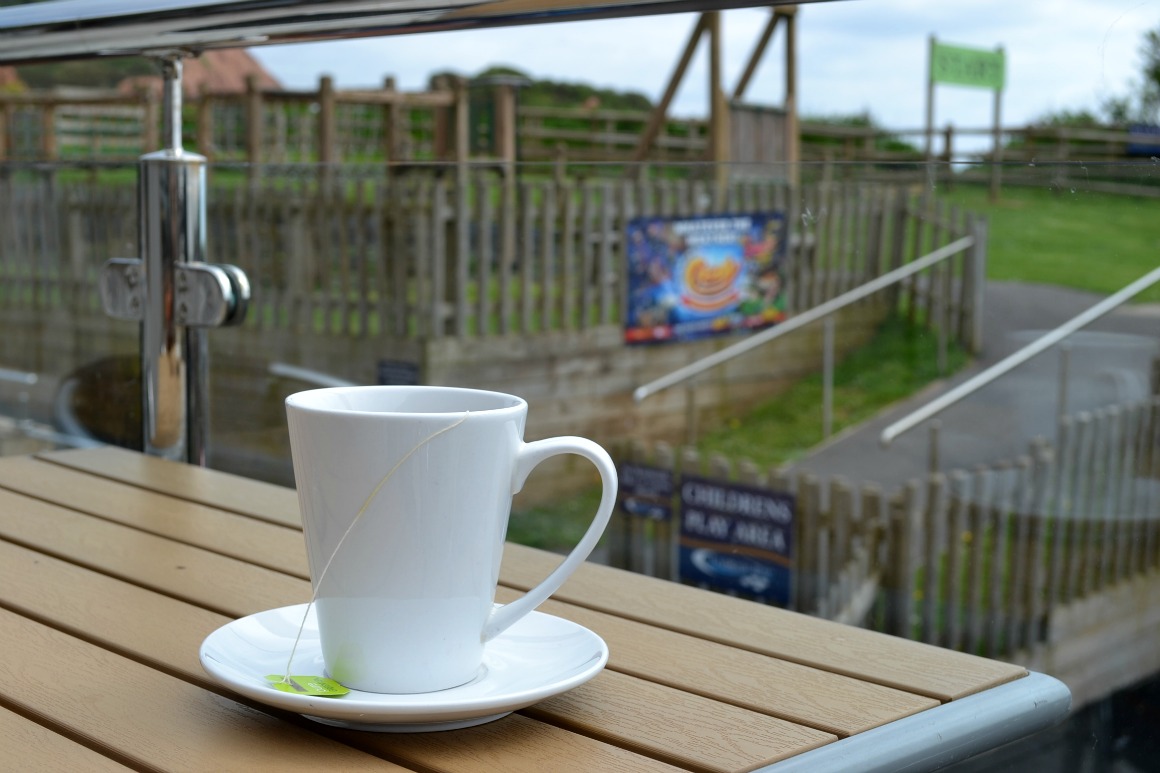 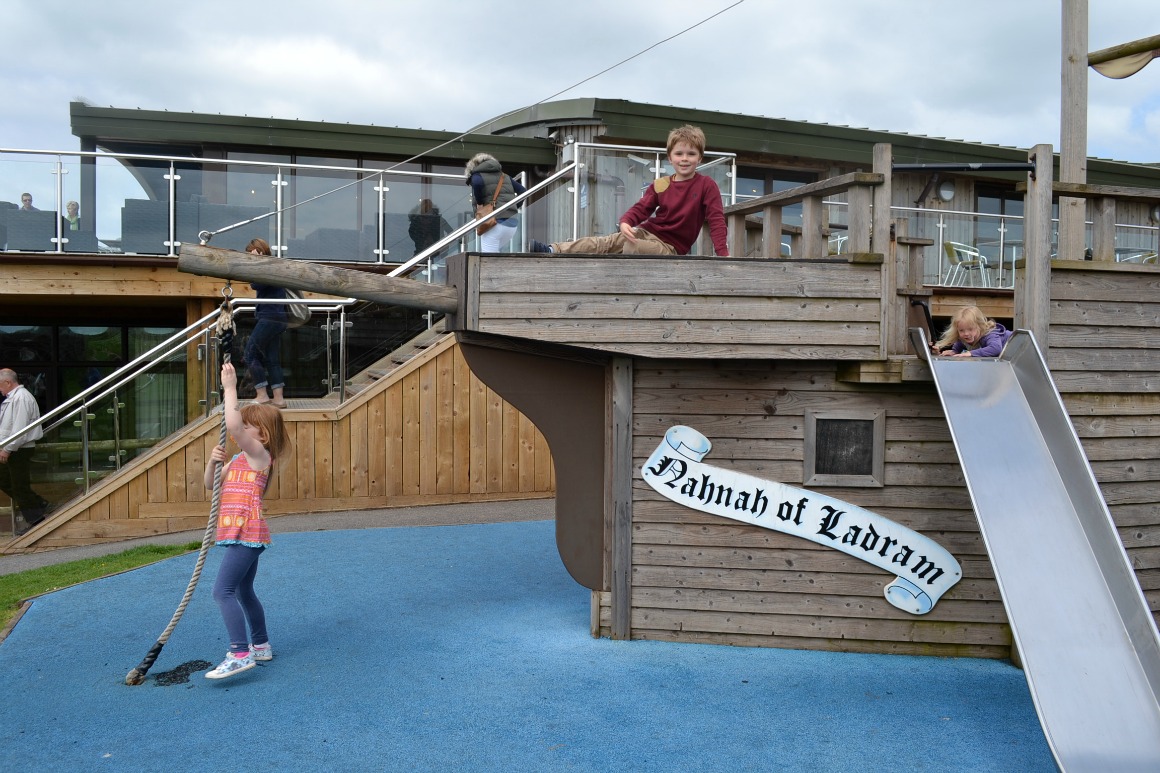 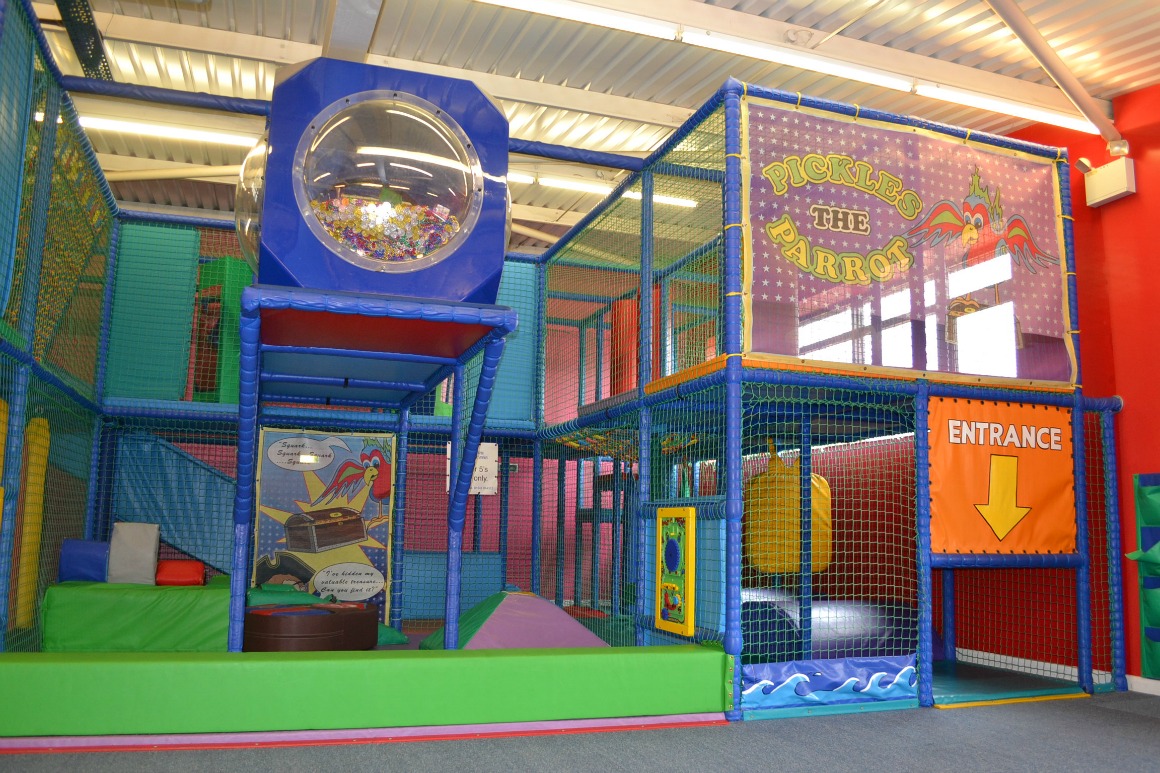 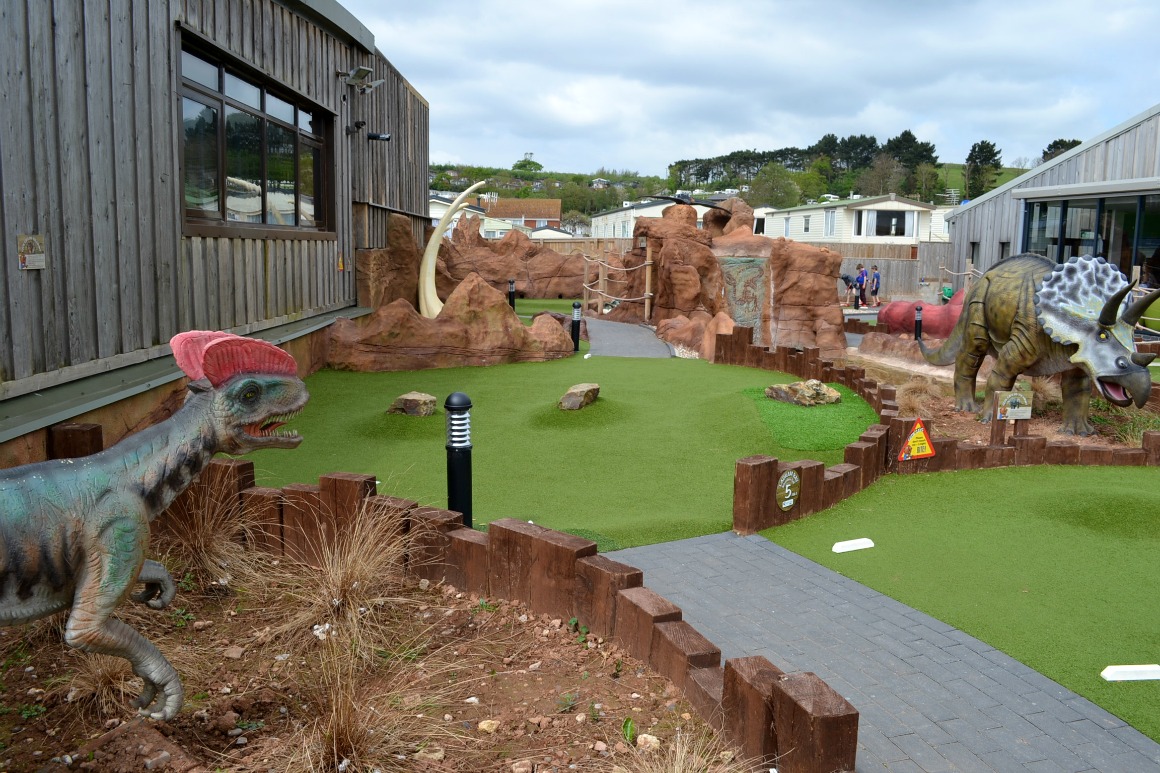 On the first night we opted to have takeaway fish and chips which was a little disappointing as they didn’t serve children’s fish and chips. All they had for children was the usual processed foods like fish cakes and chicken nuggets which we thought was a little odd considering it was a family park. Anyway it worked out okay in the end as we just bought them an adult’s portion and split it between them.

On the second night we had a BBQ by our caravan and Phil’s parents came and joined us which was lovely.

On the Sunday we decided to go swimming. I got told off by one of the lifeguards for sitting on one of the deck chairs that are beside the pool, apparently you aren’t allowed to sit on them if you’re not swimming. I couldn’t actually go into the pool as I wasn’t very well but I wanted to be beside the pool as it was just Phil with both of the children on his own. I thought at least if I was near them I could be a second pair of eyes as they tend to split up when swimming and it’s hard to keep watch of two of them on your own. I hadn’t realised that I wasn’t allowed to sit there so didn’t intentionally break the rules. I’m guessing if the chairs are just for show they should have a sign up saying so, so that others don’t make the same mistake?

Anyway I digress, The pool was nice and had a kiddies section at the end complete with mini water slides and spraying equipment. The kids certainly had a good time and Phil came out looking exhausted. 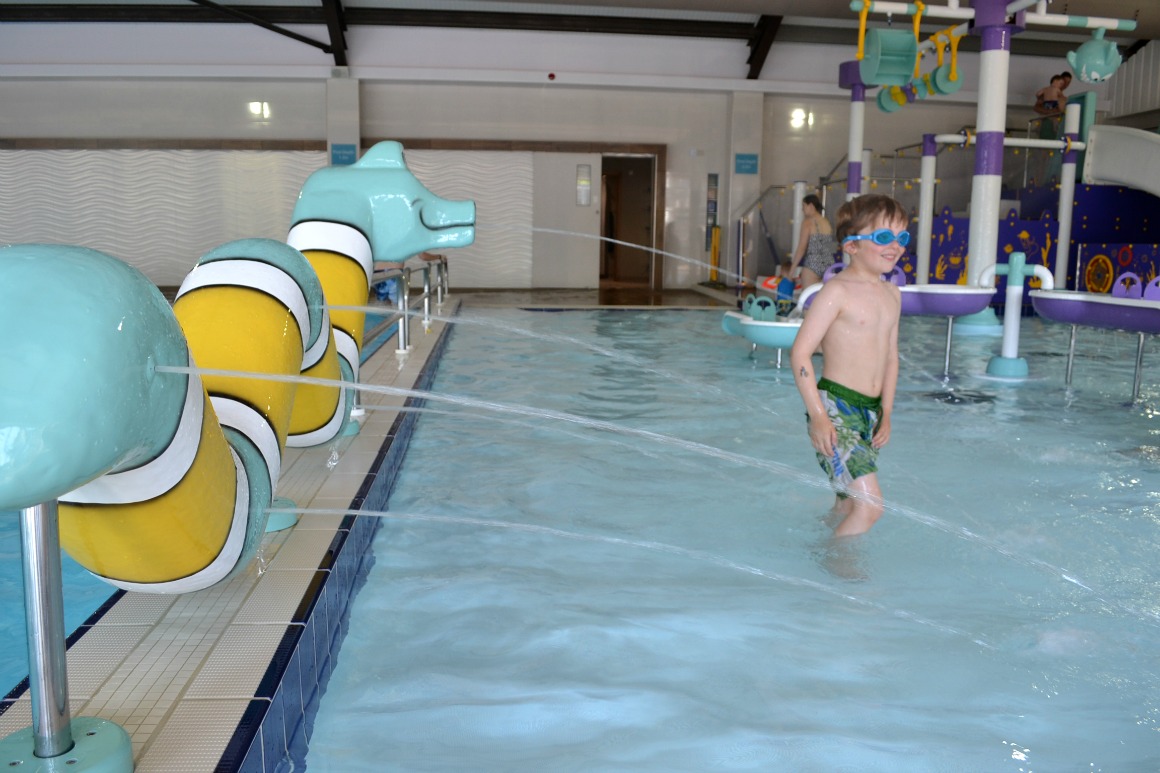 I thought it was worth mentioning that you don’t have to be staying at the park in order to enjoy their facilities. They also accommodate day visitors and walkers from the South West Coast path walk which runs right through the park.

‘If you live in the local area or want to visit the park for the day you’ll be pleased to learn that our facilities are open to non-residents throughout the season.’

I’m already making plans to visit again but this time walk there along the South West Coast path from Budleigh Salterton or Otterton. Perhaps stop for some lunch and walk back. Dogs are welcome as long as they are on a lead although they cannot go inside the restaurant or in the children’s play area but that is fine as you can sit on the balcony area and have some lunch.

We had a lovely mini-break at Ladram Bay. The sun was shining and the location was simply fantastic. There were a few little niggly issues that were annoying at the time but certainly not enough to put us off going back. If you are planning on visiting Devon for a holiday and are looking for somewhere in a stunning location, with great facilities for the kids then this is definitely a place you should consider.

If you’d like to book a holiday at Ladram Bay Holiday Park then there is currently a fantastic deal on Groupon. Hurry though as there is limited availability.

Jurassic Coast: 4 Night Caravan Stay For Up to Eight With Gas, Heating and Leisure Passes at Ladram Bay Holiday Park from £179

*Disclosure: We were invited to stay at Ladram Bay for the purpose of this review. All views and opinions are my own. *