Well we are on day four of our potty training period and I don’t want to jinx it but it has gone brilliantly. Henry has really taken to it really well. We’ve only had two accident in the last 3 days and one of those was because he had a late night on Saturday and was really tired. Even his bedtime nappy has been dry in the mornings and he asks to go as soon as he wakes up.

All I seem to of been saying this week is  ‘Do you need a wee? Do you need a poo?’. Over and over again. I must have said it a thousand times over the last couple of days but if it gets the job done! Image by Angelina Purpura
An unexpected bonus to the potty training is that since we have been doing it with Henry, Lj has taken a real interest in it too. She keeps going up to the loo saying wee wee. I put her on but she doesn’t do anything yet but I suppose it’s a start.
Maybe we’ll have them both done and dusted with nappies by next summer and then with the money we will save from not having to buy two lots of nappies we could probably afford an extra holiday yey, well at least a long weekend! Image by David Merrigan
You may laugh but I’ve actually worked it out…
We buy the huggies deal of two boxes for £16, each box has 76 nappies in. We generally go through those 2 boxes in 2 weeks (that’s if we are averaging 5 nappies a day per child roughly). So that’s £8 a week on nappies. If I then add that up for the amount of weeks until next summer…
52 weeks in a year takes us up to the beginning of next June, so that’s a grand total saving of £416! That’s a lot of money on nappies and could easily pay for a long weekend away; Venice here I come! 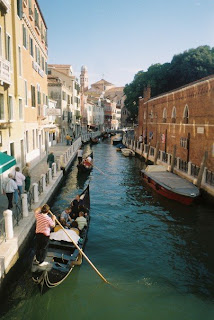 Yes I know, I know, I have way too much time on my hands today but I have an excuse… our electric is out, so that means no washing, no ironing, no hoovering, no cooking and no cash to go shopping, which has resulted in me being bored and only having a calculator to play with!